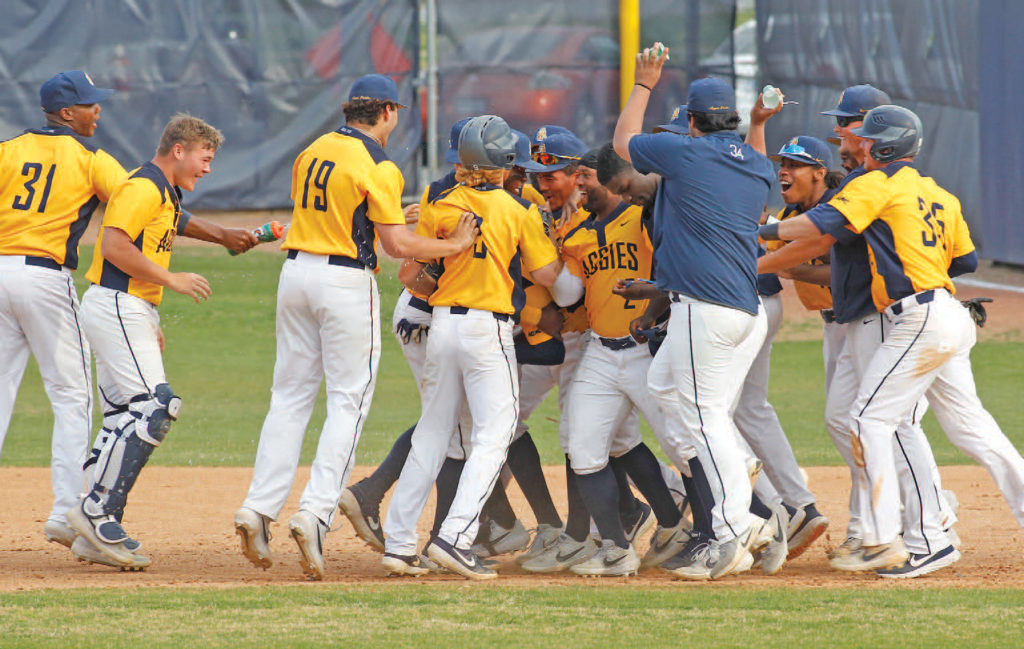 Jason King is congratulated by teammates after a game-winning RBI single in the bottom of the ninth inning, propelling the Aggies to a come-from-behind 6-5 win over Savannah State.
Photo by Joe Daniels/Carolina Peacemaker

A&T senior Dawnoven Smith belted a three-run homer in the eighth inning to tie the game and senior Jason King hit a pinch-hit, walk-off single in the ninth to lead the North Carolina A&T baseball team to a 6-5 win over Savannah State (SSU) Saturday afternoon (March 30) at War Memorial Stadium.

The win evens the three-game series at 1 after the Tigers won Game 1 on Friday. N.C. A&T (16-11, 6-2 MEAC) had to rally in Game 2 to avoid losing two straight to the Tigers (6-15-1, 4-4 MEAC).
“If you to stick with it, you have to take ownership of your at-bats mentally. You have to make sure your at-bats are built upon the guy batting ahead of you and the guy batting behind you. I’m proud they stuck with it and ended up getting the big hit from Dawnoven,” said N.C. A&T coach Ben Hall.

With the Aggies trailing 5-2, junior Dustin Baber led off the eighth with a single through the left side. One out later, Savannah State starter Caleb Hill (RHP) hit senior A.J. Hunt with the first pitch of the at-bat. After junior Camden Williamson made the second out by fouling out to first, Smith stepped into the box.

Smith rocketed Hill’s 0-1 pitch toward the trees behind the left-field wall to tie the game at 5. 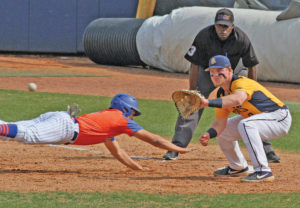 Savannah State’s Ian Concervitch dives back to first base ahead of a pickoff attempt by the Aggies’ Zack McLean. Photo courtesy Joe Daniels/Carolina Peacemaker

Senior RHP Roberto Negron came to the mound for his second inning of work in the ninth inning. He gave up a leadoff single to Aaron Straker. Negron recovered and struck out Trevor Meaney, got Jalen Atterbury to pop out and Joseph Roberson grounded to send the game into the bottom of the ninth tied at five.

SSU turned to RHP Matthew Shunk who earned the save against the Aggies on Friday. Junior Ryne Stanley put Shunk in an immediate jam by reaching on an error. Stanley then stole second and moved to third on a throwing error by the SSU catcher.

Thanks to a gut feeling that King could put a good swing on the baseball in a clutch situation because he is swinging the bat well, Hall decided to pinch hit King for Shane Faulk.

King looped the fourth pitch he saw from Shunk into right field and had it bounce just in front of Austin Adams for a base hit. Stanley scored on the play to end the game.

The Aggies jumped out to a first-inning lead on an RBI sacrifice fly from Hunt that scored Baber who doubled to open the game. Savannah State tied the game in the second before taking a 2-1 lead in the fifth. The Tigers then put together a three-run sixth inning thanks in part to a two-run homer from Justin Washington to take a 5-1 lead.

N.C. A&T, however, began to chip away starting in their sixth thanks to back-to-back doubles from Baber and Brandon Melendez that led to the Aggies cutting the lead to 5-2 before their big rally in the eighth and ninth innings.