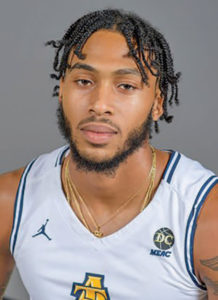 CHAMPAIGN, IL – North Carolina A&T picked up their first men’s basketball win of the season on Friday defeating the Chicago State Cougars, 74-44, at State Farm Center. It was the final game of the University of Illinois’ multi-team event.

Junior wing Tyrone Lyons and sophomore guard Jeremy Robinson led the Aggies with 14 points apiece. Senior guard Kameron Langley, the preseason MEAC player of the year, finished with nine rebounds, 11 assists and two points. It was his 20th career double-figure assist game. He needs 45 more assists to become only the 82nd player in NCAA history to have 700 or more assists in a career.

“I thought the guys got better each night,” said N.C. A&T head coach Will Jones. “We were able to put together 40 minutes tonight. The key this season will be consistently being able to play and practice.”

The Cougars (0-3) pulled within six, 23-17, after a 3-pointer from Carlo Marble. But senior guard Tyler Maye caught fire toward the end of the first half scoring eight points over the final 4 ½ minutes to help the Aggies claim a 31-23 advantage at the break.

The Aggies got off to another fast start in the second half with a 7-0 run to take a 38-23 lead, forcing a Cougars timeout.

It did not help.

CSU never got within single-digits again. N.C. A&T extended their lead to 21, 58-37, thanks to a 13-4 run that featured three straight 3-pointers from Fred Cleveland, Jr., junior Quentin Jones and Lyons.

The Aggies shot well from beyond the arc throughout the game, shooting 43.5 percent (10-for-23) as a team. They had another stellar game at the free throw line (12-for-17) by shooting 70.6 percent, and they out-rebounded their first opponent this season with a 35-34 edge over the Cougars.