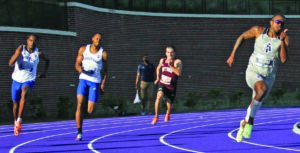 Symone Darius: Darius was one of three Aggies to qualify for the women’s Xfinity 200m semifinals. Two Aggies (Cambrea Sturgis and Kayla White) ran top-5 qualifying times. Darius made it to the semifinals by finishing 16th overall and sixth in her heat in 23.06. Unfortunately, Darius failed to qualify for the final, running a 22.97 to finish 15th overall. Darius was the Big South Conference 60-meter champion in 2022. 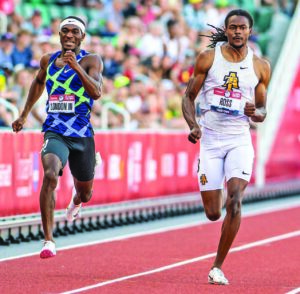 Jonah Ross: Ross failed to qualify for the women’s Xfinity 200m semifinals as she crossed the finish line in 23.17, finishing fourth in her heat. Ross won the Big South 200m indoor championship in 2022.
Paula Salmon: Salmon qualified for the 100-meter hurdles final on Saturday in 12.76. Salmon finished fifth in her heat and eighth overall. Later on Saturday, Salmon placed sixth in the final in 12.78. Salmon earned first-team All-American honors in the 60H and the 100H. She also has a second-team All-American honor in the 100H during her career. This season, she was the Big South champion in the 60H and 100H.

Cambrea Sturgis: Sturgis, the 2021 200m outdoor national champion, and Kentucky’s Abby Steiner, the 2022 200m outdoor national champion, battled throughout the USATF 200m events. Sturgis finished second to Steiner (22.14) during the first round second heat and second overall in 22.24. During Sunday’s semifinal, Sturgis ran a personal-best 22.11 to qualify for the final, where she placed fourth in 22.16. She finished third overall and second in the heat behind Steiner again.

Kayla White: White qualified for the women’s 200m Xfinity semifinal with a time of 22.38. She finished second in her heat to High Point, N.C., native and Adidas sprinter Tamara Clark (22.29). White finished fourth overall. In the semifinal on Sunday, White qualified for the final by running a 22.18. White placed third in her heat and fifth overall. Clark won the heat in 22.05. In the final, White finished seventh in 22.39.

Javonte’ Harding: Harding, the 2022 200m indoor national champion, qualified during the first round of the 200m at the USATF with a time of 20.42. He finished third in his heat and 13th overall. During Sunday’s semifinal, Harding ran a qualifying time of 20.23 to finish eighth overall and fourth in his heat. Later in the final, he finished eighth in 20.31. Harding was also the Big South outdoor 100 and 200m champion.

Randolph Ross Jr: Ross finished third in the men’s 400m in 44.17 to earn a spot on the U.S. team for the World Athletics Championships. He finished behind Olympic teammate Michael Norman who ran a world-leading time of 43.56. Florida’s Champion Allison ran a personal-best 43.70 to finish ahead of Ross Jr., a five-time NCAA national champion.