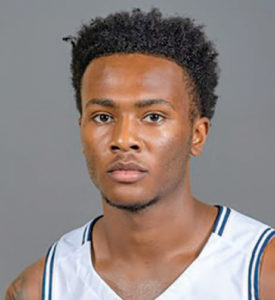 Tyler Maye led the Aggies in his return.

ORANGEBURG, S.C. – The North Carolina A&T men’s basketball team is getting healthy just in time to start the Mid-Eastern Athletic Conference (MEAC) schedule. Three of their guards returned to the lineup for the Aggies’ 97-86 win over S.C. State Saturday afternoon at the Smith-Hammond-Middleton Memorial Center.

The Aggies went 2-4 during the stretch without Maye but reaped the benefits of his comeback.

“It felt really good to return on the floor tonight after the injury I had,” said Maye. “I saw that the paint was open a lot during the game, so I tried to make plays and get in the paint and score and make plays for my teammates.”

Maye led the Aggies in scoring, the first time he has done so all year.

“T-Maye really played like a senior is supposed to play today,” said A&T head men’s basketball coach Will Jones.. “It was great to have him back. I put it all on the seniors this game.”

The Aggies played the first of four games they will play against S.C. State because of a COVID-inspired schedule. N.C. A&T has been successful in the MEAC over the previous three seasons with a combined 36 wins and two second-place finishes. They hope to get over the hurdle and into first place this season.

“I thought we played well in some points in the game,” said N.C. A&T coach Will Jones about Saturday night’s win. “We have to be better on defense, but it’s great to be 1-0.”

The Bulldogs jumped out to an early lead, but a robust and responsive Aggie run powered by junior wing Tyrone Lyons propelled N.C. A&T out front. The Aggies enjoyed the game’s largest lead after a 16-0 run and led 32-12. N.C. A&T held a 46-37 advantage at the half.

Jones, who won a MEAC Tournament championship as a player at S.C. State and served as a team captain his senior year, remains undefeated against his alma mater as a head coach.

“Being 3-0 against the Bulldogs is great,” said the 2003 SCSU graduate. “I gave a lot of sweat and tears in the gym, and it’s paying off for the Aggies.”

With the MEAC’s new divisional layout and the conference trying to reduce travel, teams are playing back-to-backs in conference play, which will make matchups all the more enjoyable.

“We need to continue to share the ball on offense and correct some fundamental defensive principles,” said Jones.