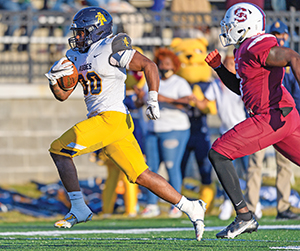 A&T may be limping to the finish line of a disappointing 2021 football season, but the coveted goal of having a winning record is still in reach.

Although this year has been marred by injuries, the constant uncertainty of COVID and other internal adversity, the Aggies have now won back-to-back road games in the Palmetto State and will return to Truist Stadium this weekend with an overall mark of 5-5.

A victory against Gardner-Webb (3-7 overall, 1-5 Big South) on Saturday would extend the program’s streak of consecutive winning seasons to nine and give the Aggies a chance for a third-place finish in their inaugural year in the Big South conference.

“Actually, I think this will set the foundation for next season,” said A&T head coach Sam Washington, who won’t be heading to the postseason for the first time since 2014. “It’s very important that we play well and winning is a part of that process.”

This game will be Senior Day for the Aggies and kickoff is set for 1 p.m.

Washington said 12 decorated A&T players will be honored pregame in what will be their final time running out on the field in front of the home crowd.

“As a senior, this is the game you remember the most,” said Washington. “We’ll do all we can to send them off in a good way.”

One of those players will be fifth-year running back Jah-Maine Martin, who entered 2021 with lofty expectations but, like many on the A&T roster, has experienced a great deal of frustration this season.

Martin, who rushed for 1,446 yards and 23 touchdowns in 2019, suffered an ankle injury late in fall camp and has struggled to regain his signature burst and quickness. He currently leads the Aggies with 489 rushing yards and four touchdowns but is no longer considered a candidate for the Walter Payton Award and may have seen his NFL draft stock greatly diminished.

The Coastal Carolina transfer helped the program win two HBCU National titles during his time in Greensboro and still is considered a guy opposing defense must be concerned about.

Against South Carolina State, Martin displayed some of his form of old – breaking off a 33-yard touchdown run late in the third quarter that proved to be the game-winning score.

This week, he will encounter a Gardner-Webb rushing defense that is allowing an average of 189.8 yards on the ground. Overall, the Runnin’ Bulldogs rank sixth out of nine Big South teams in total defense – allowing 415.0 yards per game and 27.5 points.

However, Washington cautioned against overlooking this year’s Gardner-Webb squad.

The Bulldogs nearly upset No. 10 Kennesaw State earlier this year, and are coming off a heartbreaking 32-24 overtime loss to Charleston Southern last Saturday.

Gardner-Webb currently boasts the third-ranking rushing offense in the conference, led by running back Narii Gaither who is 115 yards shy of a 1,000-yard season.

“They’re a good football team,” said Washington. “Schematically, they’re possibly one of the better teams that we’ve faced this season. Their scheme is really good.”

One of the biggest question marks for the Aggies will be who gets the start under center this week.

Redshirt-junior quarter Jalen Fowler got off to a slow start against SCSU last Saturday and was benched midway through the second quarter after completing only 1-of-6 passes for 10 yards and taking two sacks.

Backup quarterback Kingsley Ifedi led the team to a second half comeback, finishing with 125 yards and two touchdowns on 8-of-18 passing.

Washington said during Monday’s press conference that he was still undecided on who will start against Garner-Webb. However, he doesn’t think Fowler’s confidence is shattered after being pulled.

“I don’t think it’s damaged, but he’s just not having success,” said Washington. “One thing we need is for the quarterback to be very confident and have results. And right now, that’s not what we’re getting.”