After fiasco at FAMU, Aggies prepare to dominate Bison 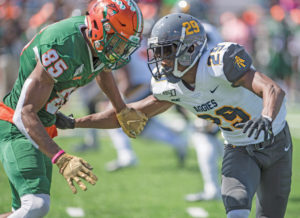 Surrounded in enemy territory and besieged by their own emotions, A&T suffered a heartbreaking 34-31 overtime loss at Florida A&M this past Sunday in a contest that was marred by an ugly halftime brawl and several player ejections.

That defeat marked the second year in a row that FAMU has shocked the Aggies on the game’s final play, and refueled concerns over a perceived lack of focus and discipline from the A&T football team.

Similar to last year’s 22-21 loss, A&T again had a number of self-inflicted wounds (10 penalties for 87 yards) against the Rattlers and some critical mental errors in key moments.
On Monday at his weekly press conference, a visibly disappointed A&T head coach Sam Washington addressed the media and offered a public apology for how his team behaved in Tallahassee.
“We allowed ourselves to fall into their trap,” said Washington, whose team suffered its first conference loss of the season. “That’s not becoming of a champion and for that I do apologize sincerely. I promise you we will get this taken care of, and it will never happen again.”

Fortunately, the Aggies are back in Greensboro this week as they prepare to square off against Howard in what folks around here like to call the Greatest Homecoming on Earth. The goal will be to put the FAMU fiasco in their rear-view mirror and prove once again to the world their championship mettle.

Kickoff is set for Saturday at 1:30 PM at BB&T Stadium. All tickets for the game have been sold out for weeks.

“We have a number of things that we are going to address immediately”, said Washington. “But the beauty of this whole thing is that we’re still in the race. And as far as I’m concerned, we’re still going to win the race.”

With the loss to FAMU, the Aggies dropped to 4-2 overall and 2-1 in the Mid-Eastern Athletic Conference. Their FCS ranking also took a hit, falling from No. 10 in the nation to No. 18 this week.

However, because FAMU was placed on NCAA probation prior to the season and ruled ineligible for the MEAC title, A&T still controls its own postseason destiny. Win their remainder conference games and the Aggies will repeat as MEAC champions and return to the Air Force Reserve Celebration Bowl this December in Atlanta.

First up will be a struggling Howard team that was predicted to be a title contender heading into this season but has been stymied by player defections and internal strife.

The Bison enter the contest with a 1-6 overall record and have been in a steady free-fall since star quarterback Caylin Newton and three other players announced that they would be sitting out the remainder of the season and entering the transfer portal.

Caylin, who is the younger brother of Carolina Panthers quarterback Cam Newton, said that his decision to transfer stemmed from a desire to “compete for a championship”. That news came right after Howard’s lone win of the season, a 24-9 victory at Delaware State on September 1. Since then, the Bison have been dominated in three straight losses, surrendering an average of 49.3 points per game during that span.

Newton, who was named the MEAC’s Offensive Player of the Year after his sophomore season in 2018, was the heart and soul of the Bison’s roster. His sudden departure came on the heels of former head coach Mike London leaving the Howard program this offseason to take the William & Mary job.

To replace Newton, Howard has turned to freshman quarterback Quinton Williams, who has thrown for 577 yards, six touchdowns and three interceptions.

On paper, this should be a contest that A&T dominates easily in all three phases of the game. However, if the recent past has proven anything, the Aggies know that even superior talent won’t ensure victory if you can’t keep your emotions in check.

Against FAMU, three A&T players including starting cornerback Mac McCain and senior wide out Elijah Bell were ejected at halftime. Every player on both teams received an unsportsmanlike conduct penalty after a melee occurred when both teams were heading into the locker room. Since McCain and Bell had already received separate unsportsmanlike conduct penalties in the first half, that second penalty caused both players to be automatically disqualified.

A&T running back Jah-Maine Martin saw his consecutive streak of 100-yard rushing performances come to an end at three games, as FAMU held him to 77 yards and one touchdown on 22 carries. Helping to bolster the ground attack was backup running back Kason Baker who exploded for a 36-yard touchdown run in the third quarter.

Senior quarterback Kylil Carter had another solid performance last week, completing 21-of-31 passes for 251 yards and one interception, before suffering cramps late in the game. He was replaced by sophomore Jalen Fowler, who performed heroically off the bench. Fowler converted an important two-point conversion pass play to bring the Aggies to within 25-28 and then led A&T on a 17 play, 82-yard scoring drive at the end of regulation to force overtime.

Afterwards, Washington said that even though he was disappointed by his team’s overall discipline, he was encouraged by the number of players who made big contributions in this game and the heart his team showed to embark on the comeback.

“The one thing I am very proud of is the kids did not quit,” said Washington. “They fought to the end. We’ve got to go back to the drawing board and do the little things right. If we work together as a football team, I think we’ll be all right.”