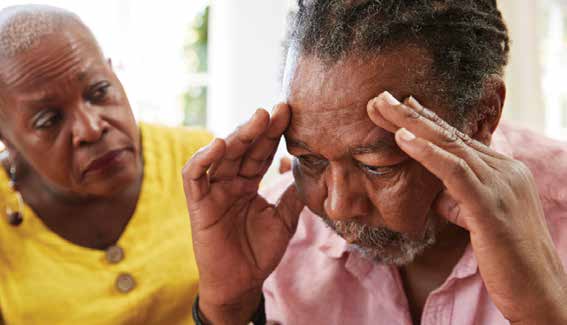 Weathering is a term used to describe the accumulation of racial stressors and has been shown to be linked to poor health outcomes. African Americans suffer more weathering than Whites.

Brain health was the topic of a recent study published this month in JAMA Neurology (the Journal of the American Medical Association Neurology). The news of this study was indeed sobering. The study analyzed the brains of 1,500 study participants via MRI scans. Researchers were studying the effects of aging on the brains of the participants.

The researchers did not credit this difference simply to one’s racial identity, but rather they described what was occurring as weathering. Weathering refers to the accumulation of racial stressors over time due to discrimination, poverty, residential segregation, pollution and fears about personal safety. Weathering has been shown to be linked to poorer health outcomes. These would include depression, migraines, hypertension and higher infant and maternal mortality.

The study in JAMA Neurology highlights and strengthens the fact that diseases that affect the vessels of the brain are especially at risk to damage. Stephanie Monroe, the executive director of African Americans Against Alzheimer’s, states “the study emphasizes the importance of communicating the roles that conditions like vascular disease, diabetes, and hypertension play in dementia risk. Heart health is brain health. We need to talk about that.”

Dr. Andrea Gilmore-Bykovskyi, an Alzheimer’s researcher and associate professor of emergency medicine at the University of Wisconsin, says the study provides additional evidence that immediate steps to help patients prevent dementia need to be implemented in a comprehensive manner. Focus should be on controlling high blood pressure and other aspects of vascular disease. She stated, “Cardiovascular disease is something that is largely modifiable. This (modification) is something that can be done right now while progress toward disease modifying drugs continues.”

The weathering of African Americans is long standing and is a problem that is defying change. Institutional change must take hold and grow to protect future generations.

African Americans need to understand this information and take steps now to protect their brain health. Steps must be taken to make sure that we combat the socioeconomic assaults that hit Black people daily. Everyone must also work to improve our healthcare system and strive to achieve health equity so the concept of weathering can be stopped in its tracks.