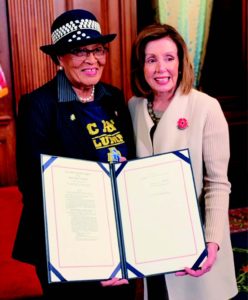 For almost two months, it looked as if the U.S. Senate was going to allow Rep. Alma Adams’ FUTURE Act bill – established in 2008, which reauthorizes “…$255 million in critical funding for “Minority Serving Institutions (MSIs) for the next two years, including $85 million for HBCUs – to go the way of other measures passed by the U.S. House this term that crossed over to the Senate.

Sen. Lamar Alexander (R-Tenn.), chairman of the Senate Education Committee, stopped the measure from proceeding after it crossed over from the House, saying that he preferred “a long-term solution.”

At first, Rep. Adams, who is co-chair of the Congressional Bi-partisan HBCU Caucus and cosponsor of the bill along with fellow North Carolinian Rep. Mark Walker (R-NC-6), expressed concern over Sen. Alexander’s action. But ultimately, the Republican was able to garner enough support for the long-term solution he originally sought, passing a stronger version in the Senate, and sending it back to the House, where Rep. Adams and others gladly ratified it last week, changes and all.

The amended FUTURE Act has been now sent over to the White House for Pres. Trump’s approval.

“Know that when Congress makes a promise for [our students’] future, we mean what we say,” Rep. Adams said on the House floor before it ratified FUTURE Act 2.0., 319 -96.
After the House passed the new measure, Rep. Adams thanked , “…all of the HBCU advocates who helped pass this bill; HBCU students, graduates, faculty, and staff; Divine nine members….” and those “who sent tens of thousands of letters to Congress….”

Rep. Adams also thanked several Democratic candidates for president, who have “…released the most ambitious campaign plans for HBCUs in history.”

“Historically Black Colleges and Universities and Minority Serving Institutions play a central role in creating pathways to opportunity and empowering Black communities, it’s because of their power that I’m here today,” said Senator Cory Booker. “I’m proud to be working with Congresswoman Adams and my colleagues in the Senate to pass the FUTURE Act to ensure that these institutions are well-funded, affordable, and continue uplifting Black and Brown Americans.”

“I applaud the tireless efforts of Congresswoman Alma Adams as well as her co-sponsors in leading the House in passing the FUTURE Act, which provides dedicated funding to our nation’s Historically Black Colleges and Universities,” said Mayor Pete Buttigieg. “For too long, HBCUs have built the Black middle class in this country with little support from our federal government. They deserve to be supported, and it starts with critical legislation like the FUTURE Act. When I’m president, my administration will invest $50 billion in Historically Black Colleges and Universities to end disparities in critical professions and work to connect graduates with opportunities to serve in areas that need it most. It’s not just the right thing to do. It’s the smart thing to do to ensure a brighter, stronger future for this country.”

Rep. Adams, in thanking her supporters, concluded by saying, “This is one of the proudest days of my career as your Congresswoman, and I’m honored to have you on my team.”