A new tribute to Dr. and Mrs. King 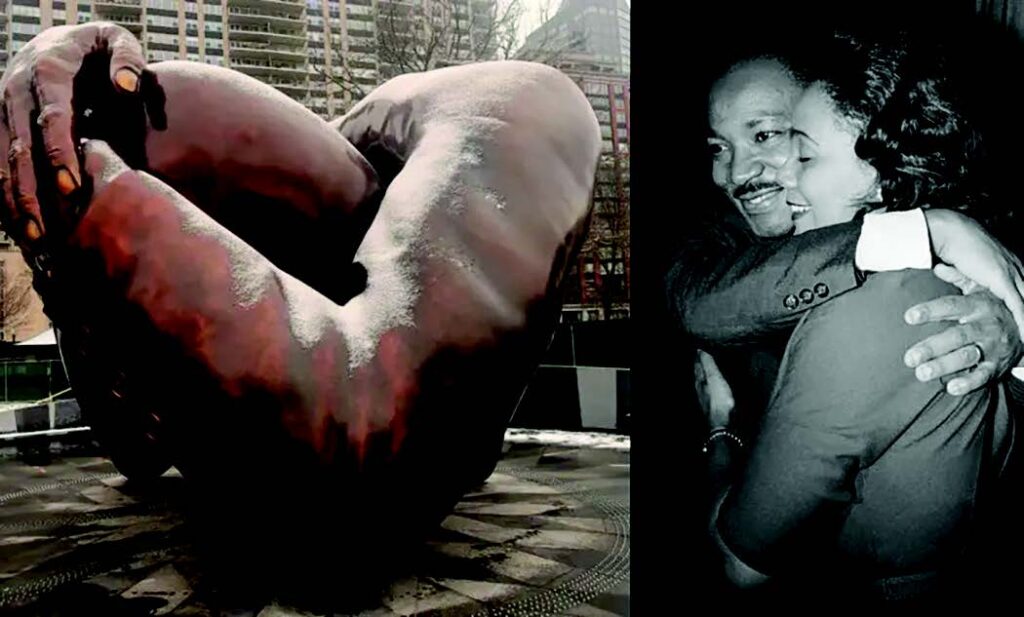 To celebrate the holiday honoring Dr. Martin Luther King Jr.’s birthday, the city of Boston has a very special gift: a new memorial was unveiled January 13 in Boston Common, the beautiful public park at the city’s center, honoring Dr. King and his wife, Coretta Scott King. The 22-foot-tall bronze sculpture anchoring the memorial, “The Embrace,” is the first large monument to be installed in Boston Common in 125 years. The powerful piece depicts the Kings’ shoulders, arms, and hands curved around each other in its namesake hug.

The memorial is the vision of the nonprofit Embrace Boston (originally named King Boston), which has been working with the City of Boston and the Boston Foundation to create a living memorial and programs to honor the legacy of Dr. and Mrs. King in the city where they met as he was earning his Ph.D. in theology at Boston University and she was earning her second bachelor’s degree at the New England Conservatory of Music. From the beginning it was critical that it celebrate both Kings and their shared work. Imari Paris Jeffries, the executive director of Embrace Boston, noted at the groundbreaking that the sculpture is meant to be a symbol of love along with being a symbol of equity, inclusion, belonging and justice.

The sculpture’s creator, artist Hank Willis Thomas, based “The Embrace” on a photograph of Dr. and Mrs. King just after they learned Dr. King had been awarded the 1964 Nobel Peace Prize. He explained in a recent interview why that particular photo inspired his design: “I just love that image, him hugging her with such glee and such joy and such pride, and I saw the pride on her face. And I recognized that this was teamwork. And all of his weight in that picture is on her…I was not alive when he was alive. She was the symbol. Her grace, her presence was palpable. And I thought that was a pretty powerful metaphor for their legacy, that she put his legacy on her shoulders and carried it for almost half a century.” Now this new memorial is a permanent tribute to that shared legacy.

The sculpture is set at the center of the 1965 Freedom Rally Memorial Plaza, which has a quilt-like design that honors 69 local leaders who fought for civil rights and social justice and memorializes the freedom march Dr. King led from Boston’s historic Black Roxbury neighborhood to the center of Boston Common in April 1965. Dr. King told the crowd gathered that day, “Now is the time to make real the promise of democracy. Now is the time to make brotherhood a reality. Now is the time.” When local officials, community organizers, and sponsors gathered for the groundbreaking last April on what would have been Mrs. King’s 95th birthday, many expressed the hope this memorial will serve as a powerful reminder that right now is still that time. As philanthropist and supporter Demond Martin put it, “While we’ll marvel at the art, we can’t forget about the action. If we simply celebrate the symbol and don’t do a better job of feeding the hungry, providing enhanced education and economic opportunities for Black and Brown people, then we fail. We fail at the very thing that Dr. King and Mrs. King strived for and Dr. King died for.”

That is the urgent message we all need to remember as we honor Dr. and Mrs. King’s legacy on Dr. King’s birthday and every day. The King family has long urged that the King Holiday be celebrated as a day of service and “a day on, not a day off.” We should never simply celebrate the symbol and neglect to keep going on the work. Back in Boston, Hank Williams Thomas explained that “The Embrace” is designed on a scale that will allow visitors to walk through the space in the center of the sculptural arms and feel they are actually part of the spirit of that embrace. Imagining that sensation and the reminder that we are all invited to be part of the same legacy should be an inspiration to everyone.

Marian Wright Edelman is founder and president emerita of the Children’s Defense Fund whose Leave No Child Behind mission is to ensure every child a Healthy Start, a Head Start, a Fair Start, a Safe Start and a Moral Start in life and successful passage to adulthood with the help of caring families and communities. For more information, go to childrensdefense.org.