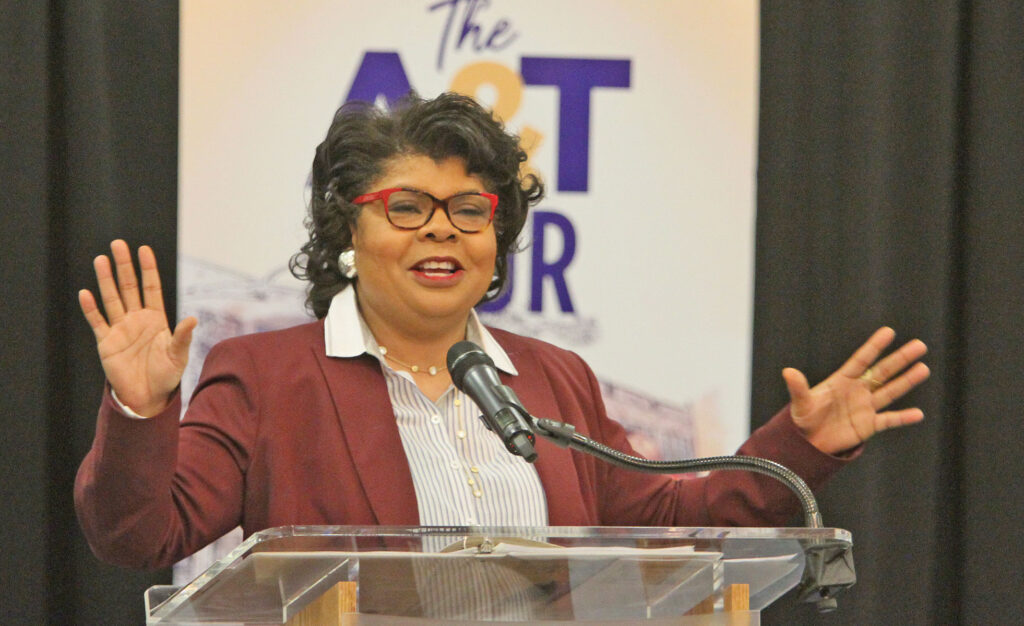 This yearly tradition commemorates the four students who began the lunch counter sit-ins at the F.W. Woolworth’s store on February 1, 1960, in downtown Greensboro. The “A&T Four” sat–in at the Whites–only Woolworth’s lunch counter and refused to leave when denied service. They stayed until the store closed and returned the next day with 25 fellow students. That pivotal moment helped galvanize the American Civil Rights Movement and lunch counter sit-ins across the United States.

Several hundred people attended the 58th Annual February One Sit-In Commemorative program called ‘Conscious for the Culture,’ but Ryan directed her message to the students in attendance.

She noted that the A&T Four were only 17 and 18 years old when they decided to take action that ultimately sparked a national movement.

“The time is different, yet the same,” said Ryan.

She told students that while using the internet can help organize people, it’s no substitute for real life actions and added that being ‘conscious for the culture’ is about more than posting on social media sites. She encouraged students not to forget the blueprint that was laid by many before them.

“People talk about on Twitter, ‘I’m upset.’ But what are you going to do about it? What these four young men did was beyond courageous,” said Ryan. “Young people are the ones who lead and change the atmosphere.”

She is the only Black female reporter covering urban issues from the White House, a position she’s held for American Urban Radio Networks since the Clinton era. Ryan has served on the board of the prestigious White House Correspondents Association, one of only three African Americans to do so in the association’s more than 100-year history.

Ryan added, “It’s ‘We the People,’ and that’s what people forget. And February 1 is a day that you remember.”

She also spoke about the importance of embracing living history by listening and learning from those who experienced it firsthand, like McNeil and Khazan, who were also in attendance at this year’s breakfast.

“Don’t take the discrimination,” McNeil advised breakfast attendees. “It could last forever if we don’t do something about it.”

“This is our history. To the students: If you don’t remember anything else, remember they were just like you are today. They had a vision, a strategy and they executed it,” said McCain Jr.
The university also awarded Bob Page, chairman and CEO of Replacements, Inc., the 2018 N.C. A&T Human Rights Medal for his longtime support of gay rights.

“Those who care about human rights still have a lot to do,” said Page. “The A&T Four inspire me to keep fighting. Not because it’s easy but because it’s hard.”

Following the breakfast, students and community members gathered at the A&T Four Monument on campus, commemorating the day with a wreath laying and march to the International Civil Rights Center and Museum, retracing the steps on that fateful day in 1960.