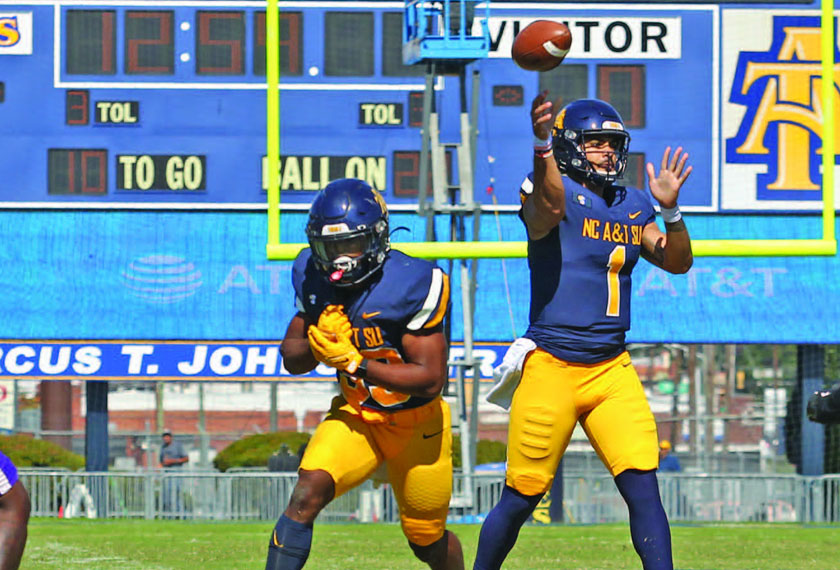 A&T upheld its end of the bargain last weekend with a convincing 38-14 victory at Robert Morris, extending its current winning streak to four games and providing another glimpse of just how good this team can be when clicking on all cylinders.

Now the stage is set for a much-anticipated, high-stakes showdown on Saturday against a 5-2 Campbell team, in what will be a battle for first place in the Big South.

Ever since the conference schedule was released this spring, fans and pundits have circled this matchup as the true litmus test on the Aggies’ title hopes. The environment at Truist Stadium is sure to be an electric one, as A&T will be celebrating its “Greatest Homecoming on Earth” – an event that’s been completely sold out for more than two weeks. Kickoff is scheduled for 1 p.m.

“On man, there’s so much going into this one,” said A&T head coach Sam Washington. “Homecoming. Just the atmosphere. The energy on this campus. The energy in this city – it’s just different.”

The first order of business for the Aggies will be finding a way to slow down Campbell’s do-it-all quarterback Hajj-Malik Williams, a redshirt junior who currently leads the Big South in total offense with 279.0 yards per game.

Washington even went so far as to compare him to Michael Vick during his weekly press conference on Monday.

“His legs scare me more than his arm,” Washington admitted. “He does a very good job of finding those [running] lanes and once he gets into open territory, he’s very difficult to bring down.”

Williams has held to just 131 yards passing and 31 yards on the ground last weekend in Campbell’s 22-14 loss to Jackson State, but he did have a 20-yard touchdown run to give the Camels an early lead.

Washington was careful not to tip his hand on his game strategy against Campbell but said it was imperative to keep Williams in the pocket.

“We’ve got to keep him contained, that’s the biggest piece.” Washington said. “Just keep him in the pocket and allow him to throw the football rather than run it. We’ll do some things to try to chase him down and try to put some speed on him. When he scrambles, we need to have somebody fast who can run after him.”

Filling that role will likely be sophomore middle linebacker Tyquan King, who had a team-leading 11 tackles against Robert Morris – marking the fifth double-figure tackle game of his young career. Fellow inside linebacker Jacob Roberts was a preseason All-Big South selection and is currently second on the team with 41 tackles, to go along with two blocked punts and a forced fumble.

Offensively for A&T, graduate quarterback Jalen Fowler is currently playing the best football of his career. Against Robert Morris he threw for a career-best 297 yards and four touchdowns, earning Big South Co-Offensive Player of the Week honors.

“I think he has really improved since last year,” said Washington. “The level of confidence in which he is playing is much different from last year. And that’s a big part of it. You have to believe in yourself.”

“One of the things he did that we had been hoping for is buying additional time [in the pocket] with his feet and keeping his eyes downfield. And in two particular instances it panned out very well for us and we got big plays as a result.”

Fowler’s confidence has likely been bolstered by a strong A&T running game that has been especially dominant in recent weeks.

A&T sophomore running back Bhayshul Tuten broke the school record with his sixth consecutive 100-yard rushing performance last weekend, racking up 139 yards on 23 carries against the Colonials while also recording a 52-yard touchdown reception. Tuten, who was recently added to the watch list for the Walter Payton Award, currently leads the Big South in rushing with 776 yards and is only 224 yards shy of the 1,000-yard mark for the season.

“I think we’re in a good place right now,” said Washington. “Of course, you always wish you had done a little better in some areas but for the most part we’re headed in the right direction.”